Well I had a great Saturday at the Gardeners World Live show, - we went early in the morning, so we were at the NEC just after nine, (for anyone that hasn't been there the NEC is a massive convention centre, and although this show was huge, it only took up 3 of the halls plus some outside area)

There was a full days viewing, so it was worth getting there early.  This year the show was partnered with the BBC good food show, so there was a hall of food goodies before you got to the plants, - Bacon butties later, we started on the display stands.

My first bit of interesting new garden stuff was this garden furniture set.

This plasticised woven set is waterproof, but the interesting thing is that when you don't need it out, it stacks up like a rocket.(yes the phallic brown shape in the background)

It was actually very comfy to sit in, although it wasn't a full size eating table, and I do like to do dinner in the garden

After some demonstrations of various gardening gadgets, and finding out about Eglu chicken houses, We succombed to buying a tool sharpening device (not as easy to use as it looked at the show, - i've been trying it out today)

I then got to do a bit of plant retail therapy, and wandered first the inside plant stalls, and then the RHS pavillion to get ideas about the best colours, varieties and bargains. 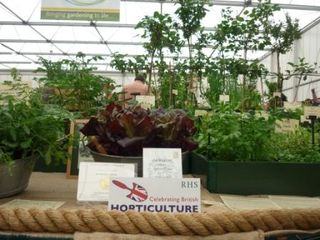 I was very pleased to see that a lot of the stalls in the plant pavilion were displaying Supporting British Horticulture signs, showing that their plants have been grown in Britain rather than imported. Paeonias, Clematis, Hosta and Fuchsias later, I was laden down and ready to look at the show gardens.

Which were a very impressive batch of gardens, and I really liked the theme running through of lots of recycling and lots of Children in the garden, - one garden was an outside classroom, with a fantastic shade sail and a fence of Raspberry and other fruit.

My favourite though was the credit munch garden, - showing just how great fruit and veg can look as well as taste 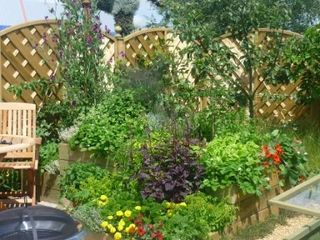 All in all I had a great day at the show, I came home with some goodies, - which I must get in the garden this week! - I would go again, but next time i'm going to see the gardens first while the light is still better, - the midday sun didn't make for easy viewing of the displays.

I love the pics, great blog thanks for this! So glad you had a good time at the event. Send a Cow were there and we had our own garden, which had loads of tips about how the keyhole garden enables families in Africa to grow veg all year round. We won a silver award (and were even featured on the BBC 2 show last Friday night) We've put up lots of pictures from the day and of our garden - http://www.sendacow.org.uk/bbcgwlblog (Send a Cow Blog) - Great blogging with you!

The comments to this entry are closed.